Full Does Not Equal Loud

Your audio mix at a performance usually doesn’t need to be loud to sound full. Keep in mind that the human ear does not have a flat frequency response across the frequency or volume spectrum. Your ear hears best at a frequency level between 1 and 4 kHz, especially at volumes below 80 dB SPL. Elevated Sounds in this range will seem louder than elevated frequency levels below 1 kHz or above 4KHz.

This means that mixes created at identical signal levels (readings on the output meter) sound louder or softer depending on the frequency balance across the audible spectrum. Low frequencies, below about 150 Hz, tend to round out the sound – they help the sound operator create a full-sounding mix.

A mix with clean highs above 7 or 8 KHZ and warm lows below about 150 kHZ typically sounds good at reasonable levels – full, without being loud.

To get good drum sounds, it’s necessary to be familiar with drum tuning and dampening techniques. A bad-sounding drum is nearly impossible to get a good recorded sound from. A good-sounding drum can make your recording experience much more enjoyable. If the drum heads are dented and stretched out, cancel the rest of your appointments for the day. You’ll be spending a substantial amount of time getting an acceptable drum sound.

If the head isn’t tuned evenly all the way around, it won’t resonate well and you’ll probably hear more extraneous overtones than smooth tones. Many drummers tune each tom to a specific pitch. In fact, inside the shell some drum manufacturers even stamp the name of the note at which the drum is designed to best resonate. 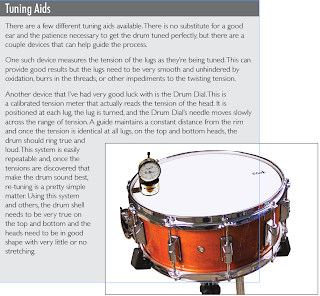 When tuning drums to a musical note, keep the configuration of the band and the type of music in mind. In a guitar band, the most common keys are E, A, G, D, and maybe C. If the drums are tuned to notes that are common to those chords, such as A, D, E, and so on, the toms will typically have good tone but the fact that the guitars and keys play those notes often will result in strong sympathetic vibrations. Although the vibrations are strong, they will reinforce the tonality of the music and they’ll blend well with the mix. Jazz bands typically play in keys with a lot of flats (Bb, F, Eb, Ab, and so on). In this setting the drums might blend better if tuned to common notes in these keys, such as Bb, F, Eb, Ab, and so on.

It is possible to minimize sympathetic vibrations by tuning the drums to notes that don’t sympathetically vibrate as strongly in the normal genre-specific keys. For example, tuning the drums to F, Bb, Eb, and Ab in a guitar band would minimize the ringing toms. The only problem with this approach is that the pitch of the drums might fight the tonality of the music—the listening audience could feel like something was always a little off, or that the vocals or primary instrument was out of tune.

Did You Know That…Your Soundboard and Effects Should Be on the Same Circuit?

After you’ve surveyed the venue, the staging is in place, and the stage layout is solidified, find a good power source and set up the AC distribution system. This is a very important part of the setup—it is often overlooked, poorly planned, or performed in random response to immediate needs. In a small setup, the soundboard and effects should ideally receive AC from the same circuit (the same outlet from the wall).

This will help eliminate hums and noises caused by ground loops.

In a large set up in a professional venue, there should be designated circuits for all audio connections. Often, these AC outlets are a different color than generic AC outlets. In North America, if you find a set of orange outlets and a set of white outlets, it’s likely the orange outlets have been specially configured and verified to provide exact phase and conditioned power. They’re often run through power conditioners to help eliminate noise and unacceptable variances in voltage. Ask the venue manager whether there are clean AC outlets specifically for audio connections.

Your Mic Is A Unique Creature

Did You Know That: Your Mic is a Unique Creature?

Almost any microphone responds to all frequencies we can hear plus frequencies above and below what we can hear. The human ear has a typical frequency response range of about 20Hz to 20kHz. Some folks have high-frequency hearing loss so they might not hear sound waves all the way up to 20kHz, and some small children many be able to hear sounds well above 20kHz. For a manufacturer to tell us that their Microphone has a frequency range of 20 Hz to 20kHz tells us absolutely nothing until they tell us how the mic responds throughout that frequency range.

Great vocalists do their best work when they feel comfortable and inspired on stage or in studio.

I learned early in my career that I can get a lot more out of a singer by providing an intelligent and inspiring mix than I can by trying to get them to adjust their technique in the middle of a gig or recording session.

My goal when I act as a sound operator is to create a mix and an acoustic environment that will inspire the vocalist to sing beautifully with his or her best tone and most emotional performance. Each singer is unique and a mix that is inspiring will be unique to him or her. There are, though, some things that I’ve found in common among vocalists:

The sound should be full and clean. In a live performance, this can be achieved by finding the right balance between the sound in the room and the sound from the monitors. It’s often better to start with the monitors at a low level so the vocals are actually being heard from the FOH system. Sometimes the monitors are so loud that the singer’s main speakers are hardly turned up, resulting in a sound that’s thin and ugly for the singer and muffled and ugly for the audience—that’s just not inspiring for anyone.

Invite the sound operator on stage. The best thing the sound operator can do for the singer is get up on stage and listen to what you’re hearing. This is often necessary if you are not on the same page as your engineer in terms of vocabulary. Simply standing where the vocalist stands will typically reveal a simple solution to the adept sound operator.

Have your own mix in the studio. In the studio, your mix is more important than the control room mix. I virtually always monitor the singer’s mix in the control room. This is really where I learned the importance of providing an inspiring mix—I discovered that, rather than asking a singer to pay more attention to intonation, I could just turn up or down the correct mix ingredient and, all of a sudden as if by magic, they were right in the pocket. I didn’t need to say a thing.

Create an atmosphere that inspires emotion. It’s a given that singers should study and practice and know all about their vocal apparatus, but I’ve found that great singers sing best when they feel comfortable: when the lights are just right, when the candles are set perfectly, when the surrounding surfaces are warm and comforting, when they feel a vibe. All of these things may seem superficial and unimportant to the “inner geek” of the sound engineer, but singers are about feeling, soul, emotion and vibe. If you can make yourself feel comfortable in the studio and stage and your engineer provides a solid and inspiring mix, you’ll give your best performance every time.

Build a good relationship with your sound engineer.Do whatever you can do to build a relationship with the sound engineer that is positive, friendly and warm – sound engineers need to reciprocate. When you know that your engineer is on your side and that they are confident in your abilities and talent, you’ll take chances and go out on a limb to try new things. Sometimes, these new things raise the level of the entire song, production, or performance. The importance of a supportive relationship between the vocalist and the sound operator can’t be overstated.

Get a good sleep. OK this is not strictly a technological consideration, but tired singers struggle much more than rested singers. Rest, health, and good nutrition are extremely important ingredients in the performer’s tool kit – and contribute hugely to the quality of the resulting mix.